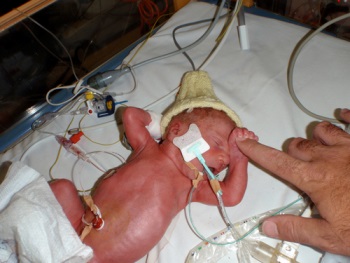 Blake’s premature arrival was due to preterm Premature Rupture of Membranes at 15 weeks gestation.   I went on strict home bed rest for the next 3½ months until 29 weeks 5 days gestation when Blake was born. He weighed 1315g.

I hardly laid eyes on Blake as he was transferred immediately to the neonate bed and then into the neonatal intensive care unit. I didn’t see him again until 18 hours later, the next day. On day 5 I got my first cuddle.  It was amazing.

Blake spent one night on the oxygen ventilator before being moved to CPAP @ 21% oxygen (air level). His rotations on and off CPAP varied as he kept getting bradycardias and desaturations.  After a month they took him off completely.  He was kept on a monitor and often had to be stimulated for him to remember to breathe. While at KEMH, he spent the first 2½ weeks in a humidicrib, was under lights for jaundice for a week, and had one blood transfusion.

At 34 weeks I started to breastfeed. This was a monumental step as a mother. After expressing every 3 hours for weeks, I was finally able to do something that the nurses and doctors couldn’t.

We decided to move Blake to St John of God Hospital at 36 weeks gestation so that our older son could finally meet him.  At 38 weeks 1 day gestation he came home on the hospital’s respiratory monitor.  Two weeks later Blake kept forgetting to breathe. He needed another blood transfusion and a sleep study found that his central nervous system was premature and was treated with caffeine.  At 7 months corrected and 3 sleep studies later, we were given the all clear.

Blake’s lungs are impacted by respiratory viruses and he has recurrent croup. Otherwise, he is now a happy 3½ year old who has caught up in weight and height and appears to be meeting his developmental milestones.